The worst of the snow seems to be over, so I’m going to trust that I can make it to Hambone’s and back. I think my weather advisory put off the few people who were coming, but ehhhh it’s better than being stranded in a parking lot. :3

Last night my car got stuck in the snow a few streets over from my house, and my sister had to drive me back to pick it up the next morning. I’m not too eager to repeat that experience in a parking lot halfway across town, soooo I’ll let you know once I’ve driven home from work (6ish) whether I plan to drive to Lawrenceville for the open stage.

So I’m moving up in the musical world! I’ve been invited to play as the featured performer at the Calliope Songwriter’s Open Stage at the Bloomfield Bridge Tavern!  The performance will be on March 3rd from 9 – 9:30 pm.

I’ve played at a few open stages at the Bloomfield Bridge Tavern but never as the featured performer. I hope you can join me for this really awesome first! 😀

Finally, Daydreams and Chocolate has a donate button! If you like what you see so far and want to see more of it, I hope you’ll consider donating!

Any donations I receive will go first and foremost towards recording and producing the EP. The rest (if there is a rest) will go towards paying off my student loans. Thank you as always for supporting me in whatever way you can!

A little late, but I haven’t forgotten! Stop by on one of these nights for some fabulous tunes!

(Note: The times posted are when the event starts, not necessarily when I’m onstage.)

The other day, I saw that my local Giant Eagle no longer sells Divine chocolate bars, which is kind of a bummer. Because of that, I’ve decided to write a blog post in their honor. 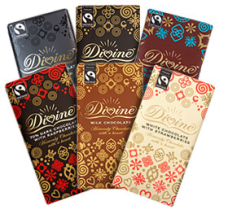 Divine Chocolate is “the only fairtrade chocolate company which is owned by its cocoa farmers,” according to the website. They sell some baking chocolate, but mostly they specialize in chocolate bars and more chocolate bars. You can order individual flavors or variety packs and even fundraising packs with mini chocolate bars.

THERE ARE COOKIES INSIDE THE CHOCOLATE! WHY WOULD YOU DISCONTINUE THAT, GIANT EAGLE?! WHY?!

Tragedy aside, Divine chocolate bars continue to be delicious, ethical, and available online.

It’s January, which means its time to evaluate my recording project!

The plan has shifted slightly, as plans do when life happens. I was hoping to churn out one song per month, but it turns out that songs — like cats — don’t come when they’re called. However, they do come eventually. Right now I have five complete songs, so that’s where I’ll start.

Instead of a 10-song album, then, I’m going to record a 5-song EP (which is like an album but with fewer songs on it). The titles of these 5 songs are:

I know 5 songs sounds less impressive than 10, but I’m actually really excited for what this means! Instead of focusing on churning out a new song each month, now I can spend the rest of the year learning the recording process and giving each individual song the attention it needs.  It’s going to be a big learning experience for me, which will (hopefully) end with an enjoyable EP for you!